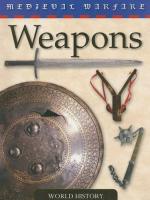 Summary: Descriptions of eightly commonly used weapons during Medieval times: sword, two-handed sword, battle ax, dagger, lance, mace, long bow, and crossbow.
Knights used the sword as their primary weapon. Two handed swords were also used. They were larger versions of the ordinary sword. They swung them with both hands creating a powerful blow. The two handed swords began to become popular during the 13th century. Knights would use not only the two handed sword but keep a regular sword in their saddle. Another powerful weapon was the battle ax. The battle axe was a popular weapon of choice for Vikings of the time as well as some knights. Against Knights, the battle axe was considered fatal. When Knights would ride into battle on a field per say, the enemy using the axe could easily drop the Knight off of his horse. The horse would likely be injured in the process. There were many different types of axes. All axes in general were used in battle and foot combat. It was used to strike the opponents head and the solid hammer-head at the back could knock out a man in armor.

The dagger was the smallest of all weapons. It was a back up weapon to Knights when they lost or dropped their sword. Knights did not use daggers very much until the 14th century. Another weapon of choice for Knights was the lance. The lance was a long wooden shaft, usually painted. The lance was typically was used in jousts, not battle. The Mace was another popular weapon used widely by foot soldiers and Knights. It could be made of wood or metal. The basic structure of the mace was a wooden or metal shaft (short usually) attached to a chain with a ball on the end of the chain with spikes sticking outward.

In a different field of weaponry, Archers used bow and arrows. They used two main kinds of bows. The first is called the longbow. The longbow was typically made of stave or yew wood and was approximately the height of the archer. The second type of bow was the crossbow. The cross bow was composed of a string that was drawn back. The arrow was placed in the grooves of the bow. It worked like a trigger system. A string was stretched tight and then released with a trigger. They were not introduced until the 11th century.

More summaries and resources for teaching or studying List of medieval weapons.