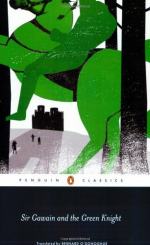 Get Sir Gawain and the Green Night from Amazon.com
View the Study Pack

This student essay consists of approximately 4 pages of analysis of Sir Gawain and the Green Night.

Sir Gawain and the Green Night

The English language is thought of as one of the most complex and complicated languages to learn. Since its conception as Anglo-Saxon, the English language has been altered over the past hundreds of years and has developed into what it is today. Though much of the lexis and language has changed, there are also several words that remain untouched. Along with the language, the times and governmental systems must change. The Medium Aevum or Middle Ages, from 1066 AD until 1485 AD, marked the accretion and denouement of Feudalism. (What was it really like to live in the Middle Ages"). Feudalism, also known as the cast system, was arranged in a pyramid-like formation with the highest power on top. As one's powers lowered, his privileges as well as his stance on the pyramid lowered in addition. For example, the most respected and powerful position in...