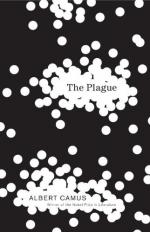 Get Cottard in Albert Camus' The Plague from Amazon.com
View the Study Pack
View the Lesson Plans

Albert Camus
This student essay consists of approximately 4 pages of analysis of Cottard in Albert Camus' The Plague.

Cottard in Albert Camus' The Plague

Summary: An analysis of Albert Camus' development of Cottard as antihero, and his treatment of Cottard's demise, in Camus' novel The Plague. The analysis also looks at how Camus utilizes Tarrou's assessment of Cottard to illuminate Cottard's place within the novel's larger themes, including those of exile and love.
The Plague

Throughout life there are always people who have the faint illusion of being able to elude their problems and the feeling of Sartre's anguish. Whether it is something minuscule such as having to pay a traffic ticket or larger like having to live in constant fear and paranoid of being arrested, which will happen eventually. One could say that "no, not all people get caught eventually", I agree not all but, most of the time people are caught. In some cases people are fortunate of having something come about that gives them a second chance. This does not just refer to crimes but, also problems in life. Such as is the case for a man (Cottard) in Camus' novel The Plague, this man is one with severe problems such as his, "secret grief" which Grand names. One presumes that this problem is severe because the first...