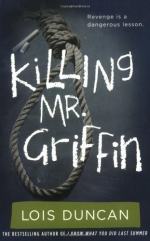 "Killing Mr. Griffin" is a suspenseful and thrilling novel about vengeance and peer pressure. Mr. Griffin is a strict high school professor who does not give A's because he believes no one is a perfectionist. His strict teaching eventually leads to his students disliking him. Jeff Garrett, David Ruggles, Betsy Cline and peer pressure victim, Susan McConnell are led by psychopath, Mark Kinney to kidnap Mr. Griffin and see him whimper and beg in front of them. "They only planned to scare their English teacher. They didn't mean to kill him. But sometimes even the best-laid plans go wrong."

I enjoyed how Lois Duncan used different perspectives throughout the novel, though the consequences of the crime are not explored, and I would like to know what became of the students, how they're finally punished. I mostly enjoyed reading the perspective of Mr. Griffin. He is strict on his students in order to prepare them for their future college courses. His students misunderstood the reason for his strict teaching and plan to kidnap him which eventually leads to his undeserving and tragic death.

"Killing Mr. Griffin" is #33 in "The 100 Most Frequently Challenged Books of 1990-2000" in the ALA (American Library Association). Lois Duncan used inappropriate language in many of her novels, though it greatly described her characters' emotions. "Killing Mr. Griffin" was well written and an enjoyable novel. I would recommend this book to anyone interested in a suspenseful read.