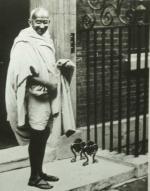 Get Gandhi and Nonviolence from Amazon.com
View the Study Pack

This student essay consists of approximately 2 pages of analysis of Gandhi and Nonviolence.

Summary: An examination of Mahatma Gandhi's use of nonviolence in India's successful bid for independence from Great Britain.
In the 1700s Britain took over India for money and trade. They formed the British East India Company too which regulated all the trade and politics. Indians lost many of their rights and were being used by the British for their own benefit. There even were several revolts throughout the years, but none were successful. What India needed was a wise man who could get their independence through a new way of thinking. This man was Mahatma Gandhi.

Gandhi is known as one of the most influential people of all time for great reason. He was a wise man who believed in peace and nonviolence. Many thought of him a as naïve for thinking that this could be an effective method of persuasion, but he proved them wrong. Even though Gandhi was a small and skinny man he made up for it with his mental strength. He was a determined person and would not give in to any type of oppression the British would throw at him. Gandhi was a man who could remain focused at the task at hand and could even bring along many followers as well to support his cause.

Some Muslims and Hindus rebelled against the British in violent protests, but Gandhi disagreed with their philosophies. Gandhi instead, protested by boycotting. He would never use any means of violence and was very tolerant to all kinds of people. He used psychology to get into the heads of the British. Whenever the British would use physical force against the Indians, Gandhi and his people would not fight back and simply took the beating. The strategy was to make the British feel guilty about hurting the Indians who were not doing anything that could physically harm the British. Whenever Gandhi got arrested and was placed inside a prison, he would fast. By starving himself, he forced the British to release him so Gandhi would not die while in the hands of the British.

Gandhi helped the Indians become free of the British and the British East India Company. He used mind over matter to overcome their rule. Gandhi is known as one of the most effective politicians of all time and is idolized by people internationally ever since his presence. Mahatma Gandhi proved to the world that there are other solutions than war to successfully become free of rule. Without Gandhi India and the world would not be the same.

More summaries and resources for teaching or studying Mahatma Gandhi.