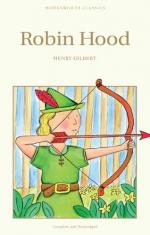 Get Robin Hood from Amazon.com
View the Study Pack

This student essay consists of approximately 3 pages of analysis of Robin Hood.

Summary: In the movie Robin Hood, The Prince of Thieves; there were both accurate and inaccurate portrayals of Medieval Europe. The majority of the film was exact and truthful, except of the lightly armoured horses and knights, witches have never existed, and that the knights seemed very weak and fragile.
Robin Hood

In the movie Robin Hood, The Prince of Thieves; there were both accurate and inaccurate portrayals of Medieval Europe. According to the movie and Medieval Europe, the accurate portrayal was how there were horses and carriages for transport; as cars, buses and so on were not invented back then; the church was highly respected and rich with many citizens looking up to it, the people's religion was very important to them, there were both good and bad knights, and public torture was well known for the people's amusement.

Though there were also some inaccurate portrayals that have been pointed out from the Robin Hood movie; the knights and horses were simply lightly armoured, the knights also were not as courageous and bold as people considered them to be, and witches dealing with black magic have never existed in those times.

Firstly, it is true that there...

More summaries and resources for teaching or studying Robin Hood: Prince of Thieves.