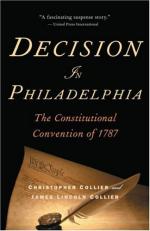 Get Founding Brothers from Amazon.com
View the Study Pack

This student essay consists of approximately 33 pages of analysis of Founding Brothers.

Summary: The founding brothers wanted America to live to its potential so the minority who wanted a unified nation organized the Constitutional Convention in 1787 with the purpose of drafting a national scale constitution. The Constitutional Convention is often criticized for its secrecy, extra-legality, and the fact that its members were of the elite--hardly a good representation of the masses. Others, though, call it '"'the miracle of Philadelphia'"' for the fact that it accomplished the seemingly impossible goal of creating a union of states.
Preface: The Generation

Some people thought that American independence was Manifest Destiny, '"'Tom Paine, for example, claimed that it was simply a matter of common sense that an island could not rule a continent.'"' But for the most part, triumph of the American revolution was improbable, and therefore it is a remarkable event in history. No one expected that Britain, the strongest country in the world would be defeated by the colonies, and that America"'"s Republic, a government uncommon in those monarchial days, would survive, yet it did.

It is only now in retrospect that the American Revolution seems inevitable. To the participants it seemed to be a long-shot. They were not expecting victory, always fearing execution for treason. Rightly so, too, since the British could have easily won the war if they had fought more forcefully in its earliest stages.

More summaries and resources for teaching or studying Philadelphia Convention.