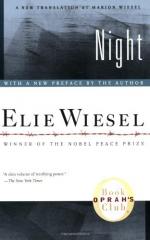 Get Place of God in the Heart of Man in "Night from Amazon.com
View the Study Pack
View the Lesson Plans
Related Topics
The Accident

Elie Wiesel
This student essay consists of approximately 1 page of analysis of Place of God in the Heart of Man in "Night.

Place of God in the Heart of Man in "Night

People replaced God with material items when they faced many trials and tribulations. During their experience of the hard runs, long train rides and the concentration camps, Eliezer and the others lost their assurance in God and put themselves over Him. The Jews struggled physically, mentally, and emotionally, and no longer believed that there was a God. These supposed "godly people" started putting food, shoes, and over-all material over their Lord. Eliezer specifically said he knew what he was doing and replaced his faith with God with false faith in himself. He and the other people slowly started noticing things always going wrong. Yet, they never reached the point that they needed to go back to God. God places trials and tribulations in people's lives. These trials and tribulations are like real hard final exams, and very few people, including the Jews, realized that they needed to study and work hard to ace the final exam.

When it specifically came to Eliezer, he eventually grew back to God. He did this after loosing his father and noticing that his personnel self and material items would not guide him like God would. Eliezers' experience with long-suffering made Him stronger and enabled him to guide others in returning to God.

Place of God in the Heart of Man in "Night from BookRags. (c)2022 BookRags, Inc. All rights reserved.