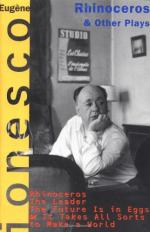 Get Discussion of "rhinoceros" by Ionesco from Amazon.com
View the Study Pack
View the Lesson Plans

Rhinoceros, and Other Plays Essay | Essay

Eugène Ionesco
This student essay consists of approximately 2 pages of analysis of Discussion of &quot;rhinoceros&quot; by Ionesco.

Discussion of "rhinoceros" by Ionesco

The theme of this story is conformity and everyone getting sucked into a trend. The first rhino was a parallel to the first Nazi follower. Everyone was surprised and controversial over it. It got people fight against each other, and they needed a sense of unity. So more and more people converted to Nazism, or being a rhino, and even husbands and friends became rhinos. Finally, the last of the humans became a rhino/Nazi. There was only one human left, and he even wanted to become a rhino, but could not.

Drinking is mentioned several times in this story because it is a symbol for illusion. Jean drank just before he became a rhino, therefore he was misguided into becoming one. The narrator also forgot about many of his troubles with Jean after he drank. And in the beginning, he didn't even care that there was a rhino/Nazi running around because he had drank and was under an illusion of safety.

Collective psychosis is when a large group of people all suffer from a type of mental disorder. This could include a total lose of personality and individuality. This is exactly what happened to all the people in the story that had turned into rhinos.

More summaries and resources for teaching or studying Rhinoceros, and Other Plays.

Discussion of "rhinoceros" by Ionesco from BookRags. (c)2022 BookRags, Inc. All rights reserved.