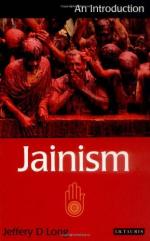 Get Principles of the Jainism Religion from Amazon.com
View the Study Pack

This student essay consists of approximately 5 pages of analysis of Principles of the Jainism Religion.

Principles of the Jainism Religion

Summary: Jainism is a religion similar to Buddhism in which the main goal is making the soul free from earthly hindrances. Karma, reincarnation and prayer are key tenets of the religion.
By Ryan Gash

Jainism is one of the most complicated and interesting religions in our world. Jainism is one of the oldest religions on earth and has a rich history. It consists of many beliefs, numerous examples of which are similar to those of Hinduism, and some that are quite different. Prayer is a major component of the religion. Jainism is itself divided into two sects. Jains, while small in number have some of the strongest beliefs among all religions.

Jainism, also known as Jain Dharma, is an ancient religion started during the early times of record keeping. It is mainly rooted in the beliefs of prince Mahavira, also known as Lord Mahavira, who lived an ascetic life in northern India from 599 to 527 BCE. He attracted many followers through his teachings.

Jainism's main goal is the attainment of the spiritual place known as moksha where the soul is...

More summaries and resources for teaching or studying Jainism.

Principles of the Jainism Religion from BookRags. (c)2021 BookRags, Inc. All rights reserved.