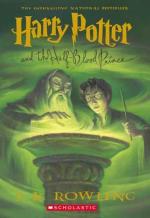 Get Harry Potter and the Half-Blood Prince Essay from Amazon.com
View the Study Pack
View the Lesson Plans
Related Topics
The Christmas Pig

J. K. Rowling
This student essay consists of approximately 2 pages of analysis of Harry Potter and the Half-Blood Prince Essay.

He is a traitor.

I would describe Harry Potter's personality as brave and yet humble. He is famous but does not like the fact that everyone makes such a commotion about his life. He values anything to do with his parents. Ron, one of Harry's best friends, has the personality of a scared rat, following his comrades. He is not as brave as Harry but is a very great friend. Hermione, another one of Harry's friends, is the smart cautious play it by the book kind of person. When Harry finds that his potions book is filled with unknown spells and tricks, Hermione does not approve one bit of it and becomes very sour for a good chunk of the book.

Some lessons you can learn from this book is to be brave and that you should have priorities and keep them in order. We can learn that some things are just more important than the things we want to do, and that we must put things aside for things we may not care for. We can also learn that we don't realize how important something or someone is until we lose them; therefore we should cherish every moment with others and our privileges.

Some questions about the plot I have, after finishing this book, are: Will Harry be able to destroy the horcruxes, objects that Voldemort has hidden part of his soul, before Voldemort can kill more and more people and ultimately killing Harry. Another question I have is: What will Harry do without Professor Dumbledore because the professor protected and provided Harry with valuable information on the Dark Lord.

I can relate to the character Ron because he does not always get things right. I can also relate to him in the way that he is not very brave and that he always needs his friends.

More summaries and resources for teaching or studying Harry Potter and the Half-Blood Prince.