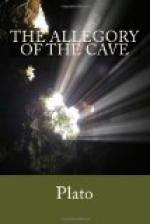 Get Freud and Plato on How the Mind Works from Amazon.com
View the Study Pack

Allegory of the cave Essay | Essay

This student essay consists of approximately 2 pages of analysis of Freud and Plato on How the Mind Works.

Freud and Plato on How the Mind Works

Summary: Both Plato and Sigmund Freud offered valid portrayals of how the mind works. This is seen in a study of Plato's Allegory of the Cave and Freud's studies of dreams.

In "The Allegory of the Cave," Plato shows how the mind influences perception. He states that because the prisoners are forced to only look at the shadows of the statues, their minds understood those images to be real. When the prisoners are freed and are able to observe other images, they still associate the shadows as a real images and everything else as copies. After adjustment, the men were able to move from shadows, to reflections, to real objects. This is when the prisoners are able to reach a cognitively stable state. The men in Plato's fable are used to show that one should venture out and become more educated because if not, one will slip back into a less cognitive state of mind.

Sigmund Freud believed that a person's dreams are fulfilled wishes. These wishes are unachieved accomplishments that the individual dwells on. He proves his theory by referring to a controllable dream of his about thirst. He believed that because he ate salty food before bed, he could fall asleep, dream about drinking, and wake up satisfied. Freud thought that the dreams are able to compensate one's unsatisfied wishes. They are actually thoughts that the mind has gathered while a person is awake. The mind, as thought by Freud, is able to twist real observations in a way which pleases the individual in an unconscious state.

Both Plato and Freud have valid portrayals of how the mind works. By presenting their information in a story-like fashion, the reader is able to better relate to and comprehend the otherwise somewhat complex issue. Since Freud is a psychologist, one may wonder if he had similar views as Plato when it came to developmental psychology and the development of cognitive thinking.

More summaries and resources for teaching or studying Allegory of the cave.

Freud and Plato on How the Mind Works from BookRags. (c)2021 BookRags, Inc. All rights reserved.