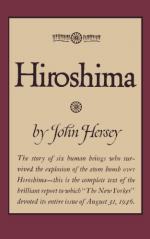 Get Hiroshima by John Hernsy from Amazon.com
View the Study Pack
View the Lesson Plans

John Hersey
This student essay consists of approximately 4 pages of analysis of Hiroshima by John Hernsy.

There were six main people that survived the blast made by the atomic bomb, Hiroshima. They were:

 Miss Toshiko Sasaki, a clerk at a Tin Works factory. Her left leg was severely injured when bookshelves fell on her from the impact of the bomb, and is left crippled. She persevered however, and became a Catholic nun who helped orphaned children. ~"I shall not dwell on the past. It was as it I had been given a spare life when I survived the A-bomb. But I prefer not to look back. I shall keep moving forward." (Speech said by her at an honoured dinner.)