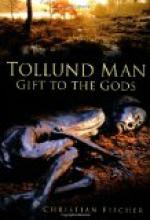 Get Tollund Man from Amazon.com
View the Study Pack

This student essay consists of approximately 6 pages of analysis of Tollund Man.

Summary: The work of archaeologists, scientists and botanists proved vital to the understanding we have of the Tollund man today. Arguments are being drawn on whether it is wrong for a museum to exhibit human remains, regardless of what can be learned from them. The Tollund Man is a great example of life during the Iron Age.
The discovery of a body preserved in a bog in Denmark, has led archaeologists to conclude that it was a sacrificial offering from the Iron Age. The body was found by accident within a peat bog in the Jutland Peninsula in Denmark by the Hojdard brothers whilst cutting peat for their tile stove. Later radiocarbon dating of the body would conclude that it was 2400 years old.

The Iron Age gave way to new tools and weapons and coincided with different agricultural practices and religious beliefs. The Iron Age arrived in Denmark around 500BC and lasted until about 1AD. This period belongs to the completely preserved bodies of sacrificial victims found in Jutland Peninsula bogs. Many more bog bodies have been uncovered over the past decades, some even dated older than the Tollund Man. These bodies have proved a valuable resource...

More summaries and resources for teaching or studying Tollund Man.