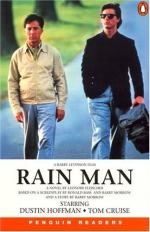 Get "Rain Man" from Amazon.com
View the Study Pack

Summary: A review of the movie "Rain Man" (1988), starring Dustin Hoffman and Tom Cruise. The movie is considered quite memorable largely due to the funny storylines and the mannerisms of the characters.
Movie review ---Rain Main

The movie was produced 17 years ago. There are still many people considering it as their favorite movie and there are so many funny storylines and mannerisms of the characters. Great acting by all those actors makes me fall in love with the movie.

Plot: Hoffman plays Raymond (rain man), an autistic whose father has left him 3 million dollars in a trust. He has amazing mathematical skills. His younger brother is a hot-shot LA car dealer named Charlie. He wasn't even aware of Raymond's existence until he read his estranged father's will. Charlie picks up Raymond and takes him on a cross-country journey. As an autistic, Raymond is afraid of raining most and he usually calls himself "rain man" instead of Raymond by mistake. Charlie kidnaps Raymond from the Cincinnati where he lives. He...

More summaries and resources for teaching or studying Rain Man.