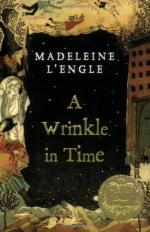 Get A Wrinkle in Time - Book Review from Amazon.com
View the Study Pack
View the Lesson Plans
Related Topics
The Moment of Tenderness

A Wrinkle in Time Essay | Essay

Madeleine L'Engle
This student essay consists of approximately 2 pages of analysis of A Wrinkle in Time.

A Wrinkle in Time - Book Review

Summary: A Wrinkle In Time, by Madeleine L'engle is an exiting book. It is about a girl who saves her fathers life. The main character is Margaret Murry. It is set in the mid-1900s.
A Wrinkle In Time

A Wrinkle In Time, by Madeleine L'engle is an exiting book. It is about a girl who saves her fathers life. The main character is Margaret Murry. It is set in the mid-1900s. One could learn from this book to never give up on a task.

One day there was a very big storm and Margaret could not get to sleep. She ended up going downstairs to get something to eat. Her little brother Charles Wallace is already down there. All of a sudden a little lady walked into the house her name was Mrs. Whatsit. She ate a little then she left. They thought it was strange. A couple of days later Charles Wallace took Meg on a walk he took her to Mrs. Whatsit's house. When they got there another boy was also there. His name was Calvin. They went inside the house and Mrs. Whatsit introduced them to her friends. They talked for a while. Then they all went outside and they tessered to the planet where their father was trapped. They saved her dad from an evil monster named IT. But IT had trapped Charles Wallace. Meg had to go back to the planet alone and save her brother and she did. When they got back to their house they where all very happy especially Meg's mom.

Meg learned not to give up on saving her brother and her dad. And she also learned to be patient. I think we all could have more of both of these qualities. I suggest this book for anyone who likes suspense or a science fiction book. A Wrinkle In Time was a very good book.

More summaries and resources for teaching or studying A Wrinkle in Time.