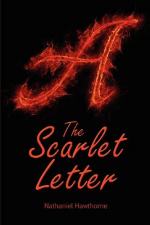 Get The Scarlet Letter from Amazon.com
View the Study Pack
View the Lesson Plans
Related Topics
The Birth-Mark
The Great Stone Face (BookRags)
The Wedding-Knell

Summary: The important theme in Nathaniel Hawthorne's novel The Scarlet Letter is freeing oneself from his or her sin through admitting the sinful act. Hester gathers strength and courage as a result of confessing her sin and enduring the punishment of Puritan society, whereas Dimmesdale's unwillingness to confess allows the sin to destroy his soul.
The theme or purpose of this book is that when a person commits a sin and does not confess, that sin will destroy the soul. Hester is the main character and had committed adultery with Dimmesdale. This occurred in the seventeenth century where there was much Puritanism. Puritanism is a religion that was mainly concerned with getting rid of immoral behavior in society by having many strict rules. Because of the social prejudices of the Puritan society, Hester must wear the scarlet letter A. As a result of her confession, the sin does not destroy her soul. With this symbol of adultery she gathers strength and courage because of her sins. Dimmesdale does not confess his sin until it totally destroys his soul. He hides his adultery and misses a chance to have Pearl as his daughter. His fear of confession is only intensified by the society of Chillingworth. Only when he confesses in public and is open with Hester and Pearl does he ever have any sense of relief. By admitting his sin, he frees himself from his sin.

In the Scarlet Letter there is much symbolism and one of the symbols is the prison. The prison represents isolation and alienation which foreshadows the life Hester and Dimmesdale lead after committing adultery. Hester lives a life of alienation and Dimmesdale lives a life of imprisonment for not confessing his sin. Another symbol is the forest which symbolizes both dark and light. When the rays of the sun shine through the trees on Pearl, but not on Hester, this represents Hester's inability to find happiness or warmth. The gesture Dimmesdale makes when placing his hand over his heart symbolizes his attempt to cover his sinfulness and prevent exposure. The major symbol in the Scarlet Letter is the scarlet letter "A." It symbolizes adultery and the agony which Hester and Dimmesdale endure. Another major symbol in this book is the colors in which the people dress. Hester dresses in dark colors to symbolize the dull and gloomy life she has led. She dresses Pearl in bright colors in defiance of the scarlet letter.

I thought this book was a very interesting book to read. It is hard to imagine a life where there are so many narrow minded and unforgiving people.