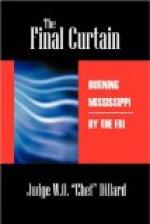 Get Oppression in America- 'Mississippi Burning' from Amazon.com
View the Study Pack

This student essay consists of approximately 5 pages of analysis of Oppression in America- 'Mississippi Burning'.

Summary: Mississipi Burning and the oppression of African Americans
Oppression in America

As with the true event which took place in 1964 the movie `Mississippi Burning' is based on the disappearance of three civil rights workers. Of these three men two were white with the one other happening to be an American Negro.

In 1988, some twenty four years after the incidence had taken place within the southern of America Alan Parker had the courage to bring forth the true event through motion picture. Based on the true story Gene Hackman and Willem Dafoe take the leading role as F.B.I agents on a journey to reveal where the three worker's are and what happened to them. The story takes and riveting adventure through the years of racism, torment, oppression and the right to freedom and equal liberty. Of the two main characters there is a severe difference between ideals and beliefs. Gene Hackman plays the...

More summaries and resources for teaching or studying Mississippi Burning.