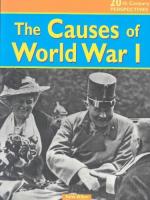 Get World War 1 from Amazon.com
View the Study Pack

This student essay consists of approximately 4 pages of analysis of World War 1.

Beginning on the 4th August, 1914 and eventually coming to a peaceful conclusion during the 11th hour of the 11th day of the 11th month 1918, World War One was a gruelling epic battle that claimed the lives of millions of people. Today we look back on those people as brave heroes, who honourably defended our countries at war. But why did all those heroes have to die for us? Why was there a war at all? In the early 20th century, European countries were anticipating a war and it just needed a few sparks for it all to go up in flames.

One of the most overpowering reasons for war to start was the alliances. There were two main alliances that were a major threat to each other and everybody else. The first established of these alliances was known...

More summaries and resources for teaching or studying Causes of World War I.