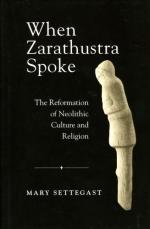 Get The Neolithic Era from Amazon.com
View the Study Pack

This student essay consists of approximately 2 pages of analysis of The Neolithic Era.

Summary: A brief description of the Neolithic Era, contending that this era was the greatest era in the history of mankind. Chief accomplishments during this era include innovations in tools, thanks in part to the use of copper; the development of the arts and architecture; the introduction of new technologies still used today, such as calendars and sewing materials; and, perhaps most importantly, the growth of farming as a food source.
The Neolithic era is the greatest era known to man with out a doubt and everyone knows this. If you did not know this you are about to find out. The Neolithic era is the best because during this era we saw the first development of tools, there ability of the arts, new technologies, and the major impact of farming.

The first major development in the Neolithic era was the improvement of tools. Many tools had been made of wood, stone, and flint. But at the beginning of the Neolithic civilization the tools began to develop and become constructed with copper.

Another big thing to happen during the Neolithic civilization was the development of the arts and architecture. Throughout the civilizations many cities had palaces and temples. This shows the there government and religion were very complex. They have also had many people who were very intelligent at decorating buildings and much of there work can be seen in museums.

Probably the most important development from the Neolithic civilization was the development of farming. When people started to farm they stopped there nomadic ways and settled down. When they settled down they grew there food and had surplus food. But when food was scarce they learned to domesticate animals so they were always available to them. With the surplus food the population grew. When the amount of people increased they developed social classes. With the development of social classes they had the first cities.

More summaries and resources for teaching or studying Neolithic.