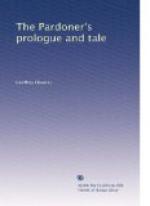 Get Pardener's Tale Vs. Simple Plan from Amazon.com
View the Study Pack

This student essay consists of approximately 6 pages of analysis of Pardener's Tale Vs. Simple Plan.

Summary: Comparison of Chaucer's "Pardoner's Tale" and Sam Raimi's "A Simple Plan" in conversation form
CHAUCER: "While many rely on previous texts as stimulus for their own, there is no excuse for your direct imitation of my own work.

RAIMI: I have no idea what you're talking about, Sam said defensively

CHAUCER: Ahhhh...but you do, my friend, your film..... it is merely a copy of my pardoners tale is it not"

CHAUCER: Yes...you're right; I am Chaucer, the only true composer of the pardoner's tale. This film "A simple plan" you have constructed is a merely a plagiarism of my masterpiece.

RAIMI: My film! My film in nothing like your stupid poem...to begin with your has been altered throughout the dynamic nature of time to be perceived with a broad degree of ambiguity. It is with no surprise that my work has been created the way it has been. Social, cultural and political influences dictate changes which...

More summaries and resources for teaching or studying The Pardoner's Prologue and Tale.