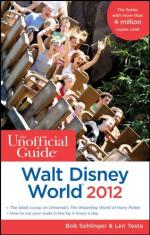 Get Walt Disney's Life from Amazon.com
View the Study Pack

This student essay consists of approximately 2 pages of analysis of Walt Disney's Life.

Summary: An overview of the life of animator Walt Disney (1901-1966), including his formative years, his achievements, and his impact on society.
Introduction

On December 5th 1901 Walt Disney was born into a family of seven, being the youngest of five children. Walt's siblings were named Walt, Roy, Ruth, Herb and Ray and Ray and Herb ran away from home. At the age of seven he was enrolled Mc Kinley State School. In 1910 The Disney family sold the farm and moved to Kansas City. Roy told Walt that he wanted to leave home, though Walt said not to. The family decided to move from Kansas though Walt wanted to stay and finish his schooling; Walt was allowed to move in with Ray.

Walt Disney have made many...

More summaries and resources for teaching or studying Walt Disney.