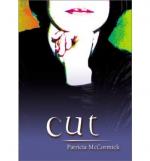 Get Cut by Patricia McCormick from Amazon.com
View the Study Pack

This student essay consists of approximately 2 pages of analysis of Cut by Patricia McCormick.

Summary: Patricia McCormick's novel Cut is about Callie, a young girl with an addiction to cutting herself. Sent to a correctional center for girls with various disorders, Callie at first refuses to talk to anyone about her problems. After meeting Amanda and seeing the scars resulting from Amanda's tendency to cut herself, Callie sees what she has done to herself and begins to open up more as a person.
In the novel Cut, written by Patricia McCormick, tells us about a young girl name Callie. Callie is like any teen girl, she does very well in school, she was a athlete, she did track, and was very fast as well. She seem like a normal teen. Except for one thing, she struggles a life at home. Her brother was indeed very ill .Due to the fact her brother was very ill, her mother quit her job, and decides to stay home to care for him, and her father was never always home.

In fact to all this, Callie has addiction she can't let go. She cuts herself whenever no one is in site. She turns almost everything, she can find into weapons in order to cut herself. Her parents later finds out and send her to a facility for girls, a place called Sea Pines. Sea Pines is a correctional center for girls of all ages, that suffers from the same addiction like Callie, or eating disorders, drug abuse, behavioral issues, etc. Callie refused to talk to anyone, that includes her parents or relatives, any other girls in the programs, or even her therapist.

In the program, Callie won't express the way she feels. She hears other girls talk about their problems, the way they handle it, and how they control it. However, Callie doesn't know if she can or couldn't. After a few days, a new girl arrives who name is Amanda. Amanda is there for the same problem that Callie faces. However, unlike Callie, Amanda would often show off her scars. Due to the fact Amanda shows her scars, Callie now see what she had done to herself. Callie is beginning to talk to her therapist more. As she continues to talk to her therapist, Callie also make new friends, and started having normal conversations, and living regular life.