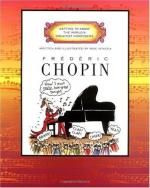 Get Comparing Chopin's Piano Music with Schumann's from Amazon.com
View the Study Pack

This student essay consists of approximately 3 pages of analysis of Comparing Chopin's Piano Music with Schumann's.

Summary: Comparison of the styles of piano music composition used by Frederick Chopin and Robert Schumann.
When comparing the piano works of Frederick Chopin and Robert Schumann, it is important to take into account the number of works each wrote in comparison to their other outputs as a composer. Chopin wrote almost exclusively for piano but this was far from the case with Schumann.

Thematic development and structure are considered to be Chopin's weak points in his compositions and this is thought to be especially true in longer pieces such as the three piano sonatas. One critic strongly criticised these pieces as they did not stick strictly to sonata form. Others however, feel that as they are Romantic sonatas, and therefore the structure is not as important as it was in Classical music, that they "should not be straightjacketed by the rigours of sonata form."

More summaries and resources for teaching or studying Frdric Chopin.