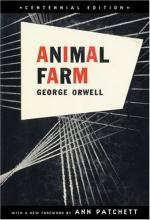 Get Absolute Power in "Animal Farm" from Amazon.com
View the Study Pack
View the Lesson Plans

Summary: In George Orwell's "Animal Farm," the farm is a methaphor for the failed Russian revolution. Orwell explores Lord Acton's concept that "power corrupts, and absolute power corrupts absolutely." Orwell's theme is that the idealistic nature of communism manifests itself as tyranny.

Animal Farm is a historical novel that depicts the history of the revolution that went wrong, the Russian revolution. The novel acts as a historical analysis for the reasons the revolution failed. The narrative tells a story of a farmyard of oppressed animals that rebel and overthrow the once feared farmer Mr Jones. Organised by the pigs the animals decide to run the farm on a communistic basis were all animals are equal and each animal works to their own capacity. Unfortunately, this idea of a utopian society quickly fades and the animals fall under a dictatorship of pigs, who are the most intelligent and idle of the animals. This transition from communism to dictatorship is mirrored by Joseph Stalin's rise to tyranny during his reign in absolute power. Throughout the novel Orwell explores the idea that power corrupts and absolute...