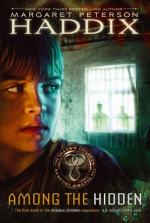 Get Plot Summary of "Among the Hidden" from Amazon.com
View the Study Pack
View the Lesson Plans

Among the Hidden Essay | Essay

Margaret Haddix
This student essay consists of approximately 1 page of analysis of Plot Summary of "Among the Hidden".

Plot Summary of "Among the Hidden"

Summary: In "Among the Hidden" by Margaret Peterson Haddix, Luke is a shadow child and meets Jen who wants to rebel, but dies. Luke gets a fake identification and calls himself Lee Grant.
I read Among the Hidden by Margaret Peterson Haddix. It takes place at Luke's House, his room (the attic), and the woods surrounding his family's farm. Luke Garner is a shadow child, a third child forbidden by the population police. He always had to be careful, but now that a housing development is replacing his family's farm he is not allowed near the windows. Worst of all he is not even allowed outside.

One day he sees a girl's face in the window of a house near by. The weird thing about it is two other children already live there. He runs over to her house after everybody left except her. He finds out that her name is Jen, She has access to the internet, and there are hundreds of people just like him, shadow children. He also finds out that Jen's father works for the population police.

Jen wants to rebel at the capitol, but Luke is afraid and stays behind. Jen thought tons of shadow children were coming, but only forty actually showed up and they shot every one of them. After a few days of not seeing Jen he fears the worst. He finally goes over and her father tells him that she was killed. Then he offers Luke a fake I.D. Luke goes on to his new life at boarding school as Lee Grant.

More summaries and resources for teaching or studying Among the Hidden.

Plot Summary of "Among the Hidden" from BookRags. (c)2022 BookRags, Inc. All rights reserved.