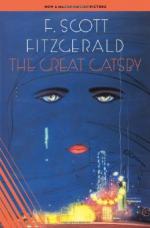 Get The Great Gatsby from Amazon.com
View the Study Pack
View the Lesson Plans
Related Topics
The Baby Party
Absolution
Two Wrongs
The Rich Boy
The Curious Case of Benjamin Button
The Adjuster

F. Scott Fitzgerald
This student essay consists of approximately 3 pages of analysis of The Great Gatsby.

Summary: What makes F. Scott Fitzgerald's classic novel The Great Gatsby such a distinctive story? Fitzgerald successfully satirized the corrupt nature of and lack of spirituality in American society following World War I; captured the failure of the American dream, as Jay Gatsby's hard work and determination failed to earn him the prosperity he desired, which was the love of Daisy; and displayed Gatsby's incapability of distinguishing between illusion and reality.
The Great Gatsby

Fitzgerald's ability to satirize the corruption of the American society makes The Great Gatsby a meaningful novel. The novel explores the American Society during the post WW1 period. A period where criminals make fortunes Circulating alcohol illegally. Through the use of emphasis Fitzgerald explores the illegal Circulation of...