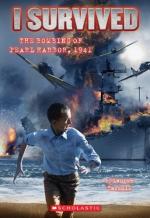 Get Pearl Harbor from Amazon.com
View the Study Pack

This student essay consists of approximately 5 pages of analysis of Pearl Harbor.

Summary: The events of Pearl Harbor are examined, especially the theory that the U.S. government knew an attack by the Japanese was coming, the events of December 7, 1941, and how the bombing triggered some aspects of World War II.
Introduction

"Yesterday, Dec. 7, 1941 - a date which will live in infamy - the United States of America was suddenly and deliberately attacked by naval and air forces of the Empire of Japan." Exactly as Franklin Delano Roosevelt proclaimed in his speech to Congress, December 7th would indeed live in infamy. Pearl Harbor was the most pivotal foreign affairs incident for the United States since the signing of the Declaration of Independence. Not only was it significant domestically, it had resounding consequences across the globe. It has lived on as one of the single most tragic events on United States soil.

The United States had received many warnings stating there would be an attack on Pearl Harbor. In October, the Soviets top spy, Richard Sorge, informed Kermlin that Pearl Harbor would be attacked in sixty days. Moscow had then informed him that this had been passed on...

More summaries and resources for teaching or studying Attack on Pearl Harbor.