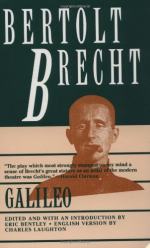 Summary: Considered by many to be the greatest scientist who ever lived, Galileo Galilei (1564-1642) is an ideal representative of the Renaissance. A study of his life reveals his many talents as a mathematician, astronomer, physicist, and inventor. His scientific theories and inventions, many of which are still used today, include his discovery of the laws of the pendulum and of motion, as well as his perfecting the telescope.

Who is this person who we call Galileo? Is he a mathematician, physicist, or an astronomer? Is he the greatest scientist that ever lived? Is he the same person that found out that Aristotle's theories about the universe and motion were wrong? Is he the same person who discovered gravity? Or did he write books? Did he discover anything new? Who is this person that the world has been talking about, and what did he do to get such great attention? Is he a representative of his age or not"

Galileo Galilei was an Italian mathematician, astronomer, and a physicist. He is the person that is called the greatest scientist that ever lived. Galileo was born in Pisa on February 15, 1564. He was born into a catholic, middle status family. His father was Vincenzo Galilei; he was a talented music teacher and a flute player. His mothers'...