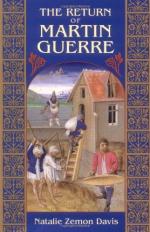 Get Feudal Patriarchal Systems in The Return of Martin Guerre from Amazon.com
View the Study Pack
View the Lesson Plans

Natalie Zemon Davis
This student essay consists of approximately 2 pages of analysis of Feudal Patriarchal Systems in The Return of Martin Guerre.

Feudal Patriarchal Systems in The Return of Martin Guerre

Martin and Bertrande are both so young when they are pushed to marry each. Two young people who have never met before are pushed to marry because of a family feud. The way the Bertrande has to leave her family and go to live with the Guerre's. Martin at this time also feels he has a somewhat power over her that she is just another toy to play with.

Bertrande is not believed when she questions the identity of Arnuad, She is pushed away by the family. Although many of them are thought to believe it is Martin, deep down we can see that they know it isn't and they are just doing this to be happy. Bertrande suffers as she realizes this is not how Martin would act and treat her. This is present when he approaches Bertrande for the first time saying "Madame you are truly beautiful." This being something Martin would not say.

We see the effect on this as no one believes Bertrande as this is a man and he says he is Martin so his identity is true. We also see the feudal patriarchal affecting the family when Martin finally comes back and is angry that his wife has betrayed him, she feels guilty although she has no reason to feel this way as she has been tricked. This shows the affect on the family.

Arnaud wanted a family and he wanted Bertrande to be his wife, although we wonder how someone could fool a woman such as Bertrande. We then draw attention to the way she needed someone, she had been so lonely for so long.