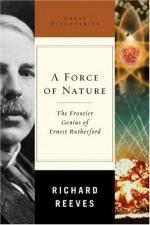 Get Biography of Lord Ernest Rutherford from Amazon.com
View the Study Pack

This student essay consists of approximately 2 pages of analysis of Biography of Lord Ernest Rutherford.

Ernest Rutherford was born in 1871. He was the second son in in his family and the fourth of 12 children. He was born in Spring Grove, (now known as Brightwater) Havlock, New Zealand. He attended public schools during his life. For 5 of those years he went to Nelson College and during his last year he was Head boy, Dux and a forward in the 1st XV rugby team. His father was a flaxmiller and wheelwright. After college Ernest got a scholarship to Canturbury University where he majored in mathematics and physics. He then stayed for an extra year teaching and studying. One of his main studies was on the properties of iron in high frequency magnetic fields. He then moved to England to work with J.J. Thompson at the Cavendish Laboratory where he worked on electromagnet waves.

More summaries and resources for teaching or studying Ernest Rutherford.