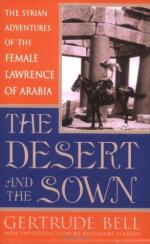 Get Why the United States. Entered World War I from Amazon.com
View the Study Pack

This student essay consists of approximately 2 pages of analysis of Why the United States. Entered World War I.

Why the United States. Entered World War I

Summary: The sinking of the Lusitania, Germany disobeying the Sussex Pledge, the Zimmermann Telegram, and patriotism to "fight the war to end all wars," the United States left behind its neutrality and join the Allies in World War I against Germany and the Central Powers.
At the beginning of World War I, the U.S. government protested the actions of both Allied and Central powers. Looking to become a peacemaker, the U.S. claimed neutrality. But the U.S. did eventually join the war due to several events.

On May 7, 1915, a German U-boat sank the British Lusitania, killing 1200, including 128 Americans. America became angry, calling Germany's act "barbarism." U-boats continued attacking Allied merchant ships, so the U.S. helped pass the Sussex Pledge, stating that German U-boats would have to warn before attacking. Germany soon broke the pledge and the U.S. became even angrier because it cut off their trade with Western Europe, for fear that the German U-boats would sink American merchant ships as well.

Another reason why the U.S. entered the war was because of an intercepted German telegram, made by Arthur Zimmermann that was on its way to Mexico. The British intercepted his telegram. When translated, this telegram told Mexico to declare war on the U.S., and if so, Germany would reward Mexico with American land. Although this was not much of a concern for neither Mexico nor the U.S., it still made Americans even more aggravated.

A final reason why the U.S. entered World War I was because supposedly, it was "the war to end all wars." This encouraged Americans to join the army, and it also increased American patriotism towards the war. Looking at the war as being the last one ever also supported the idea of world peace.

In conclusion, because of the sinking of the Lusitania, Germany disobeying the Sussex Pledge, as well as the Zimmermann Telegram and patriotism, the U.S. was forced to leave neutrality and join the Allies in World War I against Germany and the Central Powers.

More summaries and resources for teaching or studying World War I.

Why the United States. Entered World War I from BookRags. (c)2022 BookRags, Inc. All rights reserved.