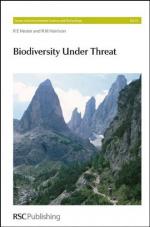 Get Biodiversity from Amazon.com
View the Study Pack

This student essay consists of approximately 2 pages of analysis of Biodiversity.

Summary: A definition of biodiversity and possible causes why the Earth is losing species so rapidly. Some of the reasons including the dramatic increase in human population and the destruction by humans of habitat.
Biodiversity refers to the sum of all the different species of animals, fungi, and microbial organisms living on Earth and the variety of habitats in which they live. It allowed ecosystems to function properly. It is essential to the well being of human and plant. However the biodiversity is in serious danger, it is shrinking at an alarming rate. It is estimated that the Earth is losing approximately 27,000 species per year. The cause of biodiversity loss is largely due to the explosion in human population.

The shrinking of the biodiversity would have a huge impact on lives of human. Biodiversity provides the necessity that makes life possible. It provides fresh water, clean air and nutrients. Without all of these things, it is impossible for human to survive,

The human destruction of the natural habitats, the raising temperature and introduced species has jeopardized our biodiversity.

The human destruction of...

More summaries and resources for teaching or studying Biodiversity.