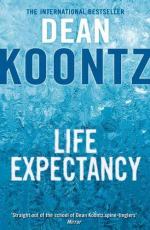 Get Aging from Amazon.com
View the Study Pack
View the Lesson Plans

Dean Koontz
This student essay consists of approximately 2 pages of analysis of Aging.

Summary: The lifespans of humans depend a lot on whether they live in rich nations or poor ones. People in Japan and Scandanavia have the longest lifespans. This is compared to lifespans of different animals, including dogs, cats and horses.
People are more likely to live long enough to get old in wealthy countries than in poor countries. In rich countries; people have nutritious food, modern medical care, good sanitation, and clean drinking water, but poor countries lack these things. As a result, the mortality rate, especially, infant mortality is very high. Citizens of Ethiopia and Yemen,which are two of the world's poorest countries, have an average life expectancy of 35-39 years. Citizens of Japan, Norway, Iceland, and Sweden, in contrast, have an average life span of more than 75 years. Japan has the highest; Yemen has the lowest. Saudi Arabia; one of the world's wealthiest nations. Having an average life expectancy of 45-49 years, Saudi Arabians live about as long as Bangladeshis and Cambodians. Surprisingly, the United States is not among the highest-rated nations having an average life expectancy of only 70-74 years.

Compared to other mammals, human have a relatively long life span. The average life span of elephants is 70 years; of dogs, 12 years; of cats, 14 years; and of horses, 20 years. The life spans of other species are as follows: eagles, parrots, and owls 60 years; guppies 5 years and box tortoises 100 years. Some plants such as trees live much longer than animals. Redwood trees, for example, live more than 3,000 years, and bristlecone pine trees can live over 4,000 years.

The life expectancy of people, who live in industrialized societies, is increasing rapidly; in fact, it has doubled in the past one hundred years. When comparing males and females, one finds that women generally live longer than men. The oldest person in the world, until recently, was a French woman Jeanne Calment. At her death in 1997, Madame Calment was both blind and deaf, but had not lose her sharp wit for which she had become quite famous. Asked what kind of future she expected, she replied a very short one. Bragging about her smooth skin, she said I've only had one wrinkle in my life and I'm sitting on it.