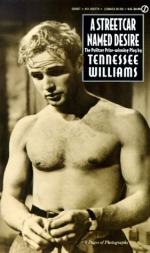 Get A Streetcar Named Desire Analysis from Amazon.com
View the Study Pack
View the Lesson Plans

Summary: Tennessee Williams' story "A Streetcar Named Desire" is about Blanche Dubois, a southern belle who loses her father's plantation to repossession and takes a streetcar called Desire to live with her sister and drunken brother-in-law in New Orleans. The 1950s theatrical presentation of this story, directed by Elia Kazan, artistically set the mood, location, and the topical time period, in part through jazzy music in the background, the accents and grammar of the characters, and the style of clothing and hair.

This 1950's theatrical presentation was directed by Elia Kazan and written by Tennessee Williams. It is about a southern bell by the name of Blanche Dubois who loses her father's plantation to a mortgage and travels to live in her sister's home in New Orleans by means of a streetcar called Desire. There she finds her sister living in a mess with a drunken bully husband, and the events that follow cause Blanche to step over the line of insanity and fall victim to life's harsh lessons.