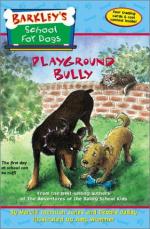 Get Types of Bullying from Amazon.com
View the Study Pack

This student essay consists of approximately 2 pages of analysis of Types of Bullying.

Summary: The types and causes of bullying that take place in society, including verbal, physical and intimidation with weapons.
Bullying is bad practice for society, commonly found in public gathering places such as streets, schools, homes, and work places. The reason for mainly someone being bullied is based on their appearance, race or skin colour. There is verbal and physical bullying which can both hurt a person(s).

First verbal bullying is the most common type of bullying. For example, criticizing someone because of their physical appearance is a lot like verbal bullying. Society teaches us to become critical of others in their downfalls. If everyone just accepted everyone for the way they are and think before they speak, verbal bullying would be something of the past. Today, we have a great deal of verbal bullying which more than likely will lead to physical bullying.

Lastly bullying people with weapons is a major concern in homes, schools, and practically everywhere else. For an example, at a high school in Colorado, two students maliciously shot at their classmates, killing and injuring many students. If someone is not physically hurt, they are in some ways mentally hurt. Victims of violence should ask someone for help or just try a bit header in believing that they are special. If you are a person affected by someone threatening you with weapons, just do the right thing, go to your nearest police station and inform them about this situation. Weapons are very dangerous and serious; especially to small children and infants.

In conclusion, people are encouraged to bullying by the society they live in which has shallow beliefs and philosophy; they try to find something to believe in, to find values, but they cannot. This situation created nihilism to them and many times creates fanaticism which leads to violent actions. The negatively influencing environment should be fought against.

More summaries and resources for teaching or studying Bully.