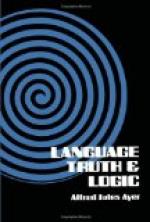 Get A.J. Ayer: The Elimination of Metaphysics from Amazon.com
View the Study Pack

This student essay consists of approximately 6 pages of analysis of A.J. Ayer.

A.J. Ayer: The Elimination of Metaphysics

Summary: In A.J. Ayer's book "Language, Truth, and Logic," the author argues that metaphysics should be abandoned as a form of philosophy. Much of Ayer's critique of metaphysical philosophy stems from the idea that insight beyond the world of reality cannot be gained because it cannot be empirically observed and understood.
The Elimination of Metaphysics

Are the ideas of Metaphysics truly something that should be abandoned? Should we no longer think about that which is beyond our scope of reality, and simply trust that which we know to be true, or even false, just so long as either can be shown to be empirically verifiable? According to the readings from the excerpts of A.J. Ayer's book Language, Truth, and Logic one would be forced to agree that Metaphysics should be abandoned as a form of philosophy. Ayer uses may different backings to let forth his opinions on the ideas of metaphysics; using the very sentences that metaphysical philosophers write against them, and showing that if an idea cannot be formed through that which we can readily, or actively understand then the ideas themselves have no bearing on philosophy. Ayer states, "A simple way to formulate it would be...

More summaries and resources for teaching or studying Language, Truth, and Logic.