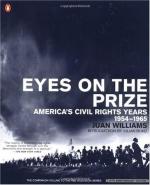 Eyes on the Prize Essay | Essay

This student essay consists of approximately 2 pages of analysis of Video.

Summary: The award-winning documentary series "Eyes on the Prize" focuses on the history of the Civil Rights Movement in America. The first episode of this series, "Awakenings (1954-1956)," covers the murder of Emmett Till, the arrest of Rosa Parks after she refused to relinquish her bus seat to a white man, and the Montgomery Bus Boycott that followed Parks' arrest.
In the video, Eyes on the Prize (1), Segment (1) "Awakenings (1954-1956)", emphasizes on events after the Reconstruction era. The African Americans were lived under a Jim Crow South and segregation, from Brown v. Board of Education to the Montgomery Bus Boycott. The blacks became involved to organize the NAACP to fight for freedom in America.

One of the case that distressed me the most is the Emmett Till case that occurred in Mississippi, 1955. Emmett Till was fourteen year old when two white men murdered him. He was going to a candy store to buy some candy and said "Bye Baby" to a white woman. Three days later Emmett Till was kidnapped by two white men and never returned. His dead body was discovered in Tallahatchie River. Emmett Till's neck was tied to a cotton gin and his body was badly beaten that it was hard to identify his body. In the trial, the two white men were found innocent. Their defense was that the body discovered from the river was too difficult to distinguish it was Emmett Till's body. This was one of the examples of injustice that the blacks faced in the South.

Not long after the Emmett Till's murder case, the incident that Rosa Parks refused to give up her seat on the bus had led to a big awakening for a big change for the African Americans. The black community bonded together and formed a bus boycott by walking or carpooling to school and work. This shows that the African Americans have the power to stand up for themselves.

The Montogomery bus boycott lasted for months. The violence was tense among the blacks and the whites. One organization that was formed by the whites, called the Ku Klux Klan, threatened and broke out violence against the blacks. The KKK would be out in broad daylight; setting up a path of destruction everywhere they went. The African Americans were living under a frightening circumstance.

All the outcomes brought the blacks to come together and fight for their precious prize: freedom.

More summaries and resources for teaching or studying Eyes on the Prize.