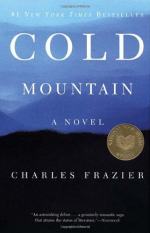 Get Issues of Class in the Film Cold Mountain directed by Anthony Minghella from Amazon.com
View the Study Pack
View the Lesson Plans
Related Topics
Varina

Charles Frazier
This student essay consists of approximately 4 pages of analysis of Issues of Class in the Film Cold Mountain directed by Anthony Minghella.

At the dawn of the Civil War, the issue of class festered behind the forefront of controversy. Southern society had long in place a hierarchical system of slaves, freed blacks, poor white farmers, and owners of large plantations. Victorian American values were mostly dictated by the upper class plantation owners. To them, being a true American meant abiding by codes of honor and old world chivalry, valuing Southern tradition and feeling an intrinsic connection to the land. In the novel and film adaptation Cold Mountain shows how Southern class barriers broke down during the war. After the Emancipation Proclamation was issued, those of different economic backgrounds had different stakes in a Southern victory. For wealthy men, securing the Cotton Kingdom was essential in order for their plantations to flourish. Anthony Minghella's film portrayal of Cold Mountain shows that after a while, those who had no stake in the...

Issues of Class in the Film Cold Mountain directed by Anthony Minghella from BookRags. (c)2021 BookRags, Inc. All rights reserved.