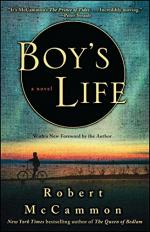 This student essay consists of approximately 3 pages of analysis of Isn't Focused.

Summary: Robert McCammon's novel Boy's Life is fun to read, in part because it lacks a sense of focus. While it is supposed to be about a murder mystery, only six of the thirty-five chapters in the book mention the murder. The unfocused approach results in a sort of wild ride for the reader, as he/she never quite knows what the author will touch on next.
Isn't Focused!

Though it is one of my favorite novels that I have read till now, there is something negative about it - it is not focused. It is good to have a different subject once in a while but a change in the subject every chapter just does not do any justice to the original script. The main subject of the novel is supposed to be a murder mystery but the murder is talked about only in six out of thirty-five chapters. There are many other miscellaneous things that the novel talks about. For example: a dinosaur from the lost world, a monkey who likes biting people's ears, a forty year old man who does not like to wear clothes (and clothes include undergarments), a 109 year old lady whom people suspect to know voodoo, a monster called Old Moses who lives in Tecumseh river, a lake called...

More summaries and resources for teaching or studying Boy's Life.