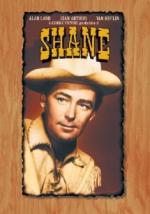 Get Summary of the Novel Shane from Amazon.com
View the Study Pack

George Stevens
This student essay consists of approximately 3 pages of analysis of Summary of the Novel Shane.

Summary of the Novel Shane

Summary: In the western novel Shane, the homesteading Starett family crosses paths with Shane, a mysterious wanderer and hardened, experienced gunslinger. Shane's relationship with Joe Starett is the most vital to the plot, as Shane helps Joe with the farmwork and with the threats of cowhands. However, Shane's relationships with Joe's wife Marion and son Joey also contributed to the final outcome of the story.
Shane: A Summary Theme

In the Western Novel, Shane, the story revolves around the Starett family, who's path crosses that of a mysterious wanderer, named Shane.

Shane was no ordinary cowhand or farmer. He is a hardened, sharp, experienced gunslinger. "He's dangerous alright." "But not to us, my dear." "In fact, I don't think you ever had a safer man in your house." Shane was an honest, hard-working man, who respects those who respect those around themselves. He is constantly going out of his way to help a family in need.

Joe Starrett is the main reason that Shane decides to stay on his farm. Shane saw that he needed his help, not only with the farmwork, but with his life. There were many cowhands in that area, trying to ward off homesteaders, so they could have the land to themselves. These cowhands were persistent with their attacks...

More summaries and resources for teaching or studying Shane.

Summary of the Novel Shane from BookRags. (c)2021 BookRags, Inc. All rights reserved.