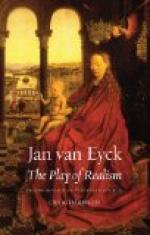 Get A Biography of Jan Van Eyck from Amazon.com
View the Study Pack

This student essay consists of approximately 2 pages of analysis of A Biography of Jan Van Eyck.

A Biography of Jan Van Eyck

Summary: Jan Van Eyck was known as "the king of painter," for his influential work as one of the most famous artists in the Netherlands. This 15th century artist's most-famous works are "The Cruxification," "The Last Judgment," and "The Arnolfini Marriage."
Jan van Eyck was a significant and talented artist. He is one of the most famous artist's in the Netherlands. People describe him as "the king of painters," and he is known as the Father of Flemish painting.

Many believe that Jan van Eyck was born and raised in an eastern province of Netherlands either called Maaiseik, Belgium, or Maastricht. He was born around 1390 but there are no records of him 1422. He worked in The Hague, Holland, from 1422 to 1424. He was a townsman and a court painter, highly esteemed by Duke Philip the Good of Burgundy. During the last 16 years of his life he was the official court painter to Philip. He has one older brother named Hubert van Eyck who is also a Flemish painter such as himself. In 1432, Eyck bought a house in Bruges. A year later he got married to a lady named Margaret but...