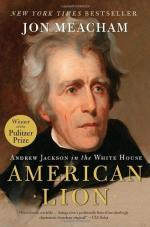 Get Andrew Jackson: The People's President from Amazon.com
View the Study Pack

This student essay consists of approximately 4 pages of analysis of Andrew Jackson.

Summary: Andrew Jackson was one of the most popular U.S. presidents in American history. As president from 1829 to 1837, Jackson remained a man of the people; his stands on various issues, particularly the Bank of the United States, the Tariff of 1828, and the Indian Removal Act, all were made with the people in mind. While some historians point to these issues as evidence that Jackson abused his power, in fact he used his powers not for his own good, but to benefit the people.
The Jackass of the People

Andrew Jackson was a man elected by the people and was completely for the people. Jackson was a popular southwestern that became a hero during the War of 1812 and later on became president. Although some of his decisions did during his presidency seemed like misconduct of power they were all for the benefit of the people. This is the very essence of popular sovereignty and the opposite of a king. Many historians today believe that he acted like a king and abused his power, but a king does not care about what the people want and does not listen to them, unlike Andrew Jackson. Past historical references show that the people dislike their king and his unlimited power over them. An example was King George and the colonies. Andrew Jackson is one of the most popular presidents in American History and...