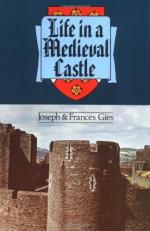 Get Medieval Castles from Amazon.com
View the Study Pack

A castle's fortification was the key to its military strength and protection. Using two independent systems of walls made a breach almost impossible. If an attacking army did breach the first wall, a second wall would stand in the way (The Columbian Encyclopedia). These walls would also help intimidate the attackers. Small holes served as windows and arrow loops through which arrows could be fired but rarely fired into (The Columbian Encyclopedia). The narrow design of...

More summaries and resources for teaching or studying Castle.