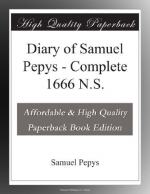 Get The Diary of Samuel Pepys from Amazon.com
View the Study Pack
View the Lesson Plans

Samuel Pepys
This student essay consists of approximately 1 page of analysis of The Diary of Samuel Pepys.

The Diary of Samuel Pepys

Summary: A brief overview of the famous diary Samuel Pepys kept during his life in 17th century England.
No one ever notices how interesting the human life is until someone writes about their own. Samuel Pepys was famous in life mostly due to the diary he kept. His diary was nothing extraordinary. It was just a basic diary of his happenings for the day. Yet his diary was very interesting to many people. His diary could be compared to our modern day soap operas.

Samuel Pepys was born in Salisbury Court, London, on February 23, 1633. He was the son of John and Margaret Kite Pepys. He had a great deal of schooling including Huntingdon and St. Paul's Schools as well as Magdalene college in Cambridge. He was married on December 1, 1655 to Elizabeth St. Michael.

His famous diary began on January 1, 1660 while he resided at Axe Yard. He went through many jobs and many events in London's history. He survived the Great Fire of London and the Great Plague. His diary entries often talked of his affairs, his drinking, and his work. His diary ended May 31, 1669, due to his poor eyesight. Shortly after that, on November 10, 1669, his wife died.

Samuel continued life as usual. Then in 1689, he ended his official career as Secretary of the Navy. He was committed to Gatehouse in June and then released in July. He retired to William Hewer's House at Clapham. He died two years later on May 26, 1703, at Clapham. His body was laid to rest in St. Olave's Church, Hart Street, London.

The Diary of Samuel Pepys from BookRags. (c)2022 BookRags, Inc. All rights reserved.