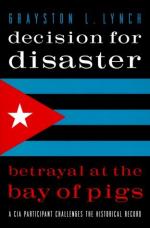 Get The Bay of Pigs Disaster from Amazon.com
View the Study Pack

This student essay consists of approximately 1 page of analysis of The Bay of Pigs Disaster.

The Bay of Pigs Disaster

Summary: A brief summary of the "Bay of Pigs" invasion, the unsuccessful attempt by the United States to overthrow the Cuban government.
The Bay of Pigs Invasion was an attempt in 1961 to overthrow the Cuban Government, and take down Fidel Castro with the US Cuban exiles. The United States broke off diplomatic relations in January 1961. The CIA was planning an invasion into Cuba, which was approved by President Eisenhower's successor, John F. Kennedy. The invasion took place on April 17th with about 1300 exiles armed with US weapons. They landed at the Bay of Pigs on the south coast of Cuba. The troops intended to cross Havana but were stopped by Castro's army. The fighting ended on April 19th, with 90 men killed and the rest were prisoners. The invasion not only embarrassed the Kennedy administration but they had to clean up the mess they made. The US sent in private groups and captured the exiles back.

My opinion on the Bay of Pigs invasion is that the US and Cuba should have solved their problems diplomatically. If they would have taken this approach, those 90 lives of Cuban exiles would have been saved. Diplomatically, the US and Cuba would have taken the peaceful way of actions. Since the Soviets were sided with Cuba, there was a very good chance if more action was taken the Soviets could have used nuclear weapons. I think that solving things without nuclear weapons and death would have suited the situation. Maybe today things would be different, and Cuba and the US would be at peace. Diplomatically it would have saved the 90 lives of the exiles and many more.

More summaries and resources for teaching or studying Bay of Pigs Invasion.

The Bay of Pigs Disaster from BookRags. (c)2021 BookRags, Inc. All rights reserved.