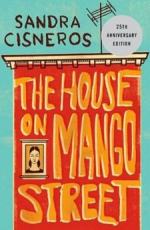 Sandra Cisneros
This student essay consists of approximately 2 pages of analysis of The Not-so-sweet Mango Street.

Summary: Sandra Cisneros' The House on Mango Street depicts a neighborhood in which men control, mistreat, and abuse women. The women, in turn, yearn to be free of such treatment; but having been treated this way by the men in their lives, they become submissive and afraid to fight back.
In many parts of the world women are mistreated by men and are too afraid to fight back when they have a chance. In The House on Mango Street by Sandra Cisneros there are similar situations. In the book many women have submissive demeanors and men are often controlling and abusive.

The women in Esperanza's neighborhood are passive. For example, when at the topic of leading your own life Esperanza says, "I have decided not to grow up tame like the others who lay their necks on the threshold waiting for the ball and chain" (88). Many women depend on marriage to get away but when they do get married they are not able to lead their own life. This is because they let their husbands rule them. Furthermore, after Sally is married she still does not get the freedom she hoped for, Esperanza explains, "She sits at home because she is afraid to go outside without his permission" (102). Sally is still trapped. She was controlled by her father and now by her husband, just like most other women on Mango Street. Trained is what the women who live on Mango Street are.

Most of the men that live on Mango Street are controlling and abusive. For example, when Sally is abused she tells Esperanza, "He never hits me hard" (92). Sally's father abuses her because he thinks she will run away like his sisters did. He has Sally's mother under control so she cannot help Sally but only comfort her by rubbing "lard on all the places where it hurts" (92). Moreover, this is what happens when after sally gets married, Esperanza explains, "He wont let her talk on the phone. And he doesn't let her look out the window. And he doesn't like her friends, so nobody can visit unless he is working" (102). Sally's husband has so much power over her. She meets her friends when he's at work but it still puts her at risk. Not all men are controlling and abusive, but most of the ones on Mango Street are.

In the book many women go through such grief that it is hard to describe in words of such sorrow and regret. Above all else they yearn to be free. The freedom that they have lost is irreclaimable. However, in the future there will be a metamorphosis.

More summaries and resources for teaching or studying The House on Mango Street.