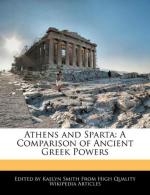 Get Athens: a True Democracy? from Amazon.com
View the Study Pack

This student essay consists of approximately 2 pages of analysis of Athens.

Athens, although many citizens had the ability to participate in the government, was still not a completely democratic state. In fact, slavery is what gave others the time to contribute to the government. These slaves had no political rights or freedom. Also, those not born in Athens that lived there were not considered citizens, henceforth not allowed to play a part in choosing how their home was governed.

In a true democracy, all people have equal say, yet in Athens, women were oppressed as well. Women were not allowed to vote on any issues. In fact, they had no share at all in public life. They were expected to stay indoors and run their households, or to tend sheep or weave. Without all citizens participating, there can not be a true democracy.

In Athens, no one had freedom of thought and expression either. If the majority didn't like the thoughts of a fellow citizen, they could banish them from Athens for a long period of time, or kill them. One instance of this is with Socrates. Socrates was a philosopher, whose modern ideas, different from those that were commonly accepted, caused others to try him for "corrupting the city's youth and failing to respect the gods." He was sentenced to death. This shows that Athens was not a true democracy, as people were not allowed to think differently from the majority without getting killed or sent away.

Although Athens was the laboratory of democracy and democratic law, it was never truly a democracy. Many people had little to no rights, oppressed because of enslavement, sex, birthplace, or beliefs. Athens itself was not a democracy, but it did set the foundations for the still-evolving democracy that is being carried on today. I'm sure 2000 years from now, people will be arguing that America's democracy right now wasn't fair either, for one reason or another, yet through trial and error, we learn from out mistakes to from a better tomorrow.

More summaries and resources for teaching or studying History of Athens.