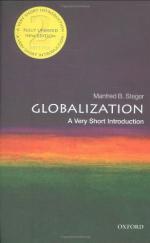 Get The Impact of Globalization on How Businesses Are Managed from Amazon.com
View the Study Pack

This student essay consists of approximately 5 pages of analysis of The Impact of Globalization on How Businesses Are Managed.

The Impact of Globalization on How Businesses Are Managed

Summary: Business globalization refers to a company's undertaking of sales and assets across international borders and the resulting flow of capital, goods, services, and labor. Coca-Cola is a good example of a company that has successfully cultivated its international business, with more than 70 percent of its income originating from non-U.S. sources. The various tactics that Coca-Coca uses to achieve this include developing a global consumer market, establishing transnational corporations to reduce production costs, product branding and positioning, competition-based pricing, and more.
`Over the past two decades, the push for globalisation has had a significant impact on how businesses are managed.'

With reference to a global business you have studied, analyse the drivers of globalisation, and how the business has developed its marketing strategies in response to the push for globalisation.

In the business report will outline the drivers of globalization. In particular, the report will focus on Coca-cola Amatil's expansion into global market, and how its marketing strategies were develop in response to globalization.

A business globalization refers to which a business has expand its sales and asset across countries and its involved international flows of capitals, goods, service and labour.

Coca-Cola (CCA) is an American producer and distributor of non-alcoholic beverage. Although CCA was first created in United State, but it quickly become popular wherever it went. CCA first international bottle plant opened in...

More summaries and resources for teaching or studying Globalization.

The Impact of Globalization on How Businesses Are Managed from BookRags. (c)2021 BookRags, Inc. All rights reserved.