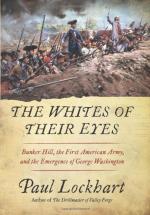 Get Bunker Hill from Amazon.com
View the Study Pack

This student essay consists of approximately 2 pages of analysis of Bunker Hill.

Under the command of General Prescott, more than 1000 patriots marched over the Charlestown neck to Breed's Hill on June 16, 1775. They had fortified it with trenches, bales of hay, and cotton by the morning of June 17. General Israel Putnam took some men to begin fortifying Bunker Hill only after the work on Breed's Hill was finished. It was with Prescott at Breed's Hill where the battle started. The first charge with the British army was on the east side of hill, and the second was a straight attack. Covered by cannons from British ships in the river, General Howe and his men lead the attack up the hill. Some of the British ships loaded their cannons with incendiary shells while this was going on and annihilated Charlestown, where only a small amount of the American troops were. Their first attack failed, so the British retreated.

The British's second attempt was to have their main fighting power going forward up the hill and the secondary group attacking from the east. This attempt also failed. Infuriated, the British took off their packs before charging in for their third try. The Americans then retreated through Charlestown neck because they were low on ammunition and gunpowder. So the British won the hills.

Over 1000 men of the British army were lost, dead, wounded, or prisoners, while the Americans only lost about 400. The outcome was that, formally, the British had won because they had gotten possession of the hill. However, the casualties of this battle tell the opposite. The battle was "immortalized forever in American history" for two reasons. The first was that it was a serious blow to the British, and the second was because of a quote that was attributed to one of the American commanders. In wanting to preserve the American's gunpowder, he had shouted, "Don't fire until you see the whites of their eyes!" So, as the old saying goes: "They may have won the battle, but not the war!"

More summaries and resources for teaching or studying Battle of Bunker Hill.